Home Sport Gaa “It will have to be our best performance” | Seanie Buckley seeking... 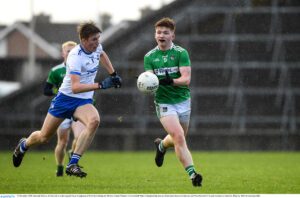 MALLOW is the venue this evening to determine who advances to the Munster minor football semi-final.

A familiar face awaits Limerick in tonight’s Munster minor phase one final as they take on Tipperary with a place in the provincial semi-final on the line.

Last year, Limerick reached a first Munster final in 23-years before being beaten by an impressive Cork outfit.

But in the reverse clash of tonight’s decider, Tipperary were comprehensive seven-point winners in Thurles. The Premier county will be looking to make it four on the trot in phase one while Limerick have responded in style with successive wins after the Tipp setback.

Looking ahead to the clash, after booking their place in the final by virtue of their round three win over Waterford, coach Seanie Buckley isn’t taking anything for granted as they seek to upset the odds.

“They’re formidable no doubt about it and tonight just looking at the score in the Clare game actually it was quite comfortable, it seemed to be from early on and it stayed that way for for the duration of the game.

“They haven’t been massively tested I suppose over the three games we hope we can get a good look at them over the next couple of days and prepare properly.

“There’s no doubt that you know if we are to compete with them and get it down to the last few minutes of the game, where it’s in the melting pot it’ll have to be our best performance of the lot. You know put all the good pieces that we’ve done in the different games together and and create a 60 minute performance out of it.”

And Limerick’s progression through phase one has been all the more enjoyable for Buckley and co as the Shannonsiders responded to an early set back against tonight’s opponents with the Drom Broadford man praising the set up of the competition that guarantees the team three games.

“It’s brilliant. You need games at this level and lads are growing into it. I just hope that when it comes to next week, that we have saved the best for last and give a full performance.”

Limerick take on Tipperary in the Munster Minor Football Phase One Final on Thursday May 5 in Mallow at 7pm.

The post “It will have to be our best performance” | Seanie Buckley seeking strong display as Limerick face Tipp in Munster Minor Football Phase One Final appeared first on Sporting Limerick.