COLLEGE lecturer John Hogan was unmasked as a paedophile who sexually assaulted two of his nieces in Limerick and Dublin more than 20 years ago when he appeared at Limerick Circuit Criminal Court today.

The 59-year-old with an address at Ashdale Avenue, Terenure, Dublin, was jailed for three years with the final year suspended, provided he is of good behaviour, doesn’t reoffend for three years  and engages with the probation service for 12 months after his release from prison.

Hogan, who was supported in court by his wife Sarah, who is an aunt to the two victims, had pleaded guilty to five counts of sexual assault on his two nieces from when they were aged eight and ten, on dates between 1994 and 2001.

Five additional counts of sexual assault were taken into consideration by the court.

Hogan can be identified after Niamh Richardson, (29), of Clonkeen, Lisnagry, Co Limerick, and, Caitríona Hickey, (37), of Econ, Murroe, Co Limerick, waved their right to anonymity.

Ms Richardson and Ms Hickey said they wanted “predator” Hogan identified in order to protect other children from him, and because they hoped it would encourage others who have suffered any type of sexual abuse to come forward.

Hogan, who has a number of children, showed no emotion as he was led away by prison officers to begin his jail sentence. 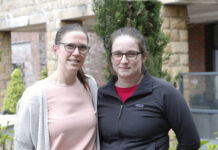 TUS unaware lecturer was before courts on child sex charges