CONVICTED child sex offender and university lecturer John Hogan appeared not to have informed his employer that he had been charged with criminal offences, it has emerged.

A spokesperson for the Technological University of the Shannon (TUS), told the Limerick Post that Hogan was still a member of its faculty staff and they were unaware he had been before the courts.

Hogan (59) of Ashdale Avenue, Terenure, Dublin, was jailed for three years with the final year suspended at Limerick Circuit Court on Monday.

He had pleaded guilty to five counts of sexually assaulting two of his nieces at their homes in Co Limerick, from when they were aged eight and ten.

For the last four years, Hogan had enjoyed anonymity because of a court order which prevented the media from legally naming him in order to protect his victims.

However, on Monday, Hogan’s nieces, Caitríona Hickey and Niamh Richardson, waived their right to anonymity so that Hogan, a lecturer at the Department of Civil Engineering and Trades at TUS Athlone campus, could be legally identified.

When contacted for comment following Hogan’s jailing, Technological University of the Shannon (TUS), said Hogan was still a member of its faculty staff and that it had not been aware he was before the courts up until it had read about the case in the media.

“We can confirm that John Hogan is an employee of the Technological University of the Shannon,” replied a TUS spokesperson.

In a follow up statement, the spokesperson said: “Technological University of the Shannon (TUS) first became aware of the criminal charges against and conviction of John Hogan from the media reports on his sentencing, which were published on Monday, May 16 2022.”

“TUS is dealing with the issues arising from the sentencing as a matter of urgency.”

Caitríona Hickey said she was shocked to learn that TUS had not been aware of the case against Hogan, given that she said there had been investigations as well as post-sentencing reports submitted to the court on Hogan’s risk of reoffending.

“I’m shocked and surprised, I’m just in shock he managed to keep it that way, it’s terrifying. He must have really thought his legal team had done enough to keep him out of jail,” Ms Hickey said.

Hogan was in his mid-30s when he sexually assaulted his two nieces at their homes in County Limerick, and one of them at his home in Dublin on dates between 1994 and 2001.

He had faced a total of ten counts of sexual assault of the two women when they were young girls, however five of the counts were taking into consideration by the court.

His nieces disclosed the assaults to their families in 2017, and when he was confronted by members of the victim’s families, Hogan admitted he had sexually assaulted them.

Hogan told the families he was battling demons and that he was getting help, his sentencing hearing heard.

Hogan told Ms Hickey’s father Sean Hickey, “There’s no point denying it”, when the allegations were put to him, and he told Bob Richardson that his daughter was “completely true” in her disclosure about the sexual assaults.

Reading their victim impacts statements in court, the two women said they were waiving their anonymity “to ensure John doesn’t do this to anyone else”.

Ms Hickey told Gardaí: “He needs to be stopped, I never want anyone else to experience it”.

Hogan had apologised and was remorseful, his barrister told the court.

The barrister said Hogan had claimed to have been a victim of sexual abuse as a teenager but wasn’t using this as an excuse for his own sexual offending.

The barrister said Hogan was offering €15,000 compensation to his two nieces as a token of his apology. He told the court this should not be taken as an attempt by Hogan to buy his way out of a prison sentence.

The barrister said that due to Hogan’s conviction, and publicity about the case, Hogan would likely suffer consequences regarding his job as a lecturer.

He said Hogan had been placed on a register for sexual offenders, and argued that a custodial sentence would undermine Hogan’s willingness to seek therapy as well as his ongoing engagement with a private counsellor.

He said Hogan’s degree of rehabilitation is incomplete and he needs to go further down this road, however there were limited resources in the prison system offering specialised therapy for sex offenders.

Addressing them, he said: “To both of you, you have done nothing wrong, it is Hogan who has done wrong, a wrong for which he must be made responsible for his actions.

“It was an enormous breach of trust, grooming took place and the assaults were both opportunistic and planned and took place often during family occasions for Hogan’s pleasure,” said the judge.

He remarked the four years it had taken for the case to come to court had added further stress on the victims which was unacceptable.

Hogan showed no emotion as his sentence was imposed and he waved briefly at his wife, who was sitting in the court, as he was led away by prison officers to begin his jail sentence. 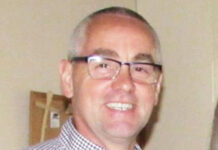