WHEN she foretold the death of a man two months before it occurred, well known Limerick radio producer Anne Marie Geraghty knew she had to investigate her apparent sixth sense.

Until now the Athlone native, who has for 20 years produced current affairs radio programme ‘Limerick Today’ on local radio station Live 95, kept her encounters with the “spirit world” under wraps because she was “afraid of ridicule, people’s reactions and, more importantly, of not being believed”.

Geraghty has self-published a debut book of journal entries over a four-year period entitled ‘My Other World’, in which she reveals her interactions with the spirit world, angels, and more.

“I think things happen for a reason, even if they are awful and sometimes I don’t understand it,” she explained.

While sometimes frightened by experiences of the paranormal, Geraghty says she has also found solace in her vivid premonitions, and seeing vibrant colours, auras, mist and sparks.

She says a “white mist” routinely appears in her home in Croom which she, her husband and their two children share with the spirit of a little girl and a small lady, dressed all in white.

For a number of years, a tap in one of the bathrooms in the house seemed “to have a mind of its own”, and would inexplicably randomly turn itself on. She contacted plumbers but they all shook their heads in disbelief.

In one chapter, Geraghty recalls visiting a “white witch” in the hopes of discovering more about her visions and she was told she was a “magnet” for hundreds of spirits.

She has also visited a priest as well as spirit guide Lorna Byrne for advice. She was told: “I’m open, I get messages from souls and angels and need to be careful in what I say to people, and be careful about the other side. Under no circumstances am I ever to touch a ouija board. I’m to help people in so far as I can, that’s why these things happen to me.”

While maintaining her day job on the airwaves, Geraghty has gained a certificate in psychotherapy, completed a HSE SafeTALK programme on suicide awareness and prevention, has trained as a mental health practitioner in workplace resilience, and has provides tarot and angel card readings.

“There was no one doubting this more than me,” she said, but other members of her family have experienced similar spiritual encounters.

“The mist whirling around the house, I can see very often; that could happen once a week, it could be just random. It’s supposed to be a presence, but the glistening mist that I see around people is, more-or-less, a presence with them,” she said.

“I don’t know all of the answers, I’m only going by my own experience and what my conclusions are, and I’m still learning. But Lorna Byrne, who has a huge following, is the one who took the fear out of a lot of these things for me.

“I think there are loads of people like me who experience these things, and I do think I am tapping into something that is unexplainable. It is linked to things that are going on in one’s life; premonitions.

“I always get a little sign before a death in my family, and keeping a record of these things shows me that there is too many specific things that have happened for it to be coincidence.”

She will never forget a terrifying episode when she had a real-time vision of a “translucent coffin” appearing over her first born daughter who had become unwell from a chest infection “and within the space of an hour she went limp.

“It seemed like she had passed out, so I got in the car and drove into the doctors like an ambulance. She was given oxygen and they said she had developed bronchiolitis and that the next stage would have been hospitalisation had I not brought her in”.

She said her visions have been there since childhood but it took her  until now to talk about it because there was that fear of reaction.

“I have met so many people who have experienced similar things and there is too much of it to be left unsaid or ignored.

“I feel this is something for my kids and further generations, and also to help connect with other like-minded people, to help people. And I’m at a point in my life where I don’t care what people think.”

My Other World is available from Amazon UK and Amazon USA or via www.annemariesotherworld.com 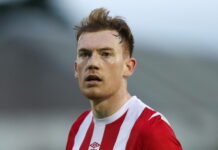 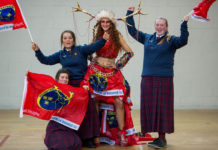