HISTORY was made at County Hall last Friday when Joe Pond became the first nominee to be twice co-opted to a seat on Limerick City and County Council.

He narrowly lost out on a seat in the 2019 Local Elections and was selected as nominee for the Limerick City East seat vacated by the untimely death of Cllr Jerry O’Dea last June.

Fianna Fáil Council party leader Michael Collins welcomed Cllr Pond back to the fray, describing him as a man with “vast experience” and as a “great asset to his community”.

“Joe is a very hard worker. He missed out on a seat in the last local elections by a small margin, but he will pull it back in the next one,” Cllr Collins said.

Cllr Catherine Slattery (FF) described Cllr Pond as both an asset to his community and his party.

“I am delighted to see him back.”

Independent councillor Frankie Daly considered him as a “huge boost to the Castletroy community”. While Cllr Michael Sheahan (FG) praised his “excellent work” in his previous council term.

“This is a great day for Joe and his family and supporters. The last election was very difficult for him as he was just pipped to the post.

“Sometimes you work hard and are not rewarded for the work you have done. But today Joe, you are rewarded for your hard work,” Cllr O’Hanlon commented.

“Great to see you back. You were a great colleague in the last council. Your community are lucky to have you,” Cllr Ryan said.

The significance of the occasion was not lost on Labour Party councillor Joe Leddin.

“You are the first Limerick councillor to be co-opted on more than one occasion. History has been made today, congratulations.”

“I am looking forward to working with you,” he said.

Cllr Pond said he was honoured to fill the vacancy left by his former party colleague Jerry O’Dea and paid tribute to his work as a local representative. He also vowed to work for the “greater good of the city and county”.

“I look forward to working closely with you all on the council,” he concluded. 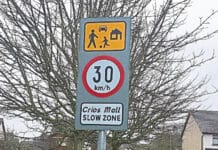