A NEW ambulance service designed to keep older people safely in their own homes rather than taking them to a hospital emergency department has been launched at University Hospital Limerick (UHL).

The Pathfinder service is being provided by National Ambulance Service (NAS) staff working with colleagues from HSE acute hospitals in Limerick, Tallaght and Waterford.

Welcoming the introduction of the new service, UL Hospitals Group chief executive Prof Colette Cowan said UHL would be offering it to suitable older people in its catchment area.

“The Pathfinder model demonstrates that pre-hospital services can help to safely keep older people in their own home rather than transporting them to the emergency department for assessment.

“Many older patients can be safely and appropriately managed in their own home rather than being transported to the emergency department when they dial 112/999 with low acuity complaints,” she added.

The Pathfinder rapid response team respond to 999/112 calls for people aged 65 years and older in their homes where the patient is assessed by both an Advanced Paramedic and Occupational Therapist/Physiotherapist.

Where appropriate, the team supports the older person at home rather than bringing them to emergency department, by linking with a wide range of alternative hospital and community services.  It also operates a follow-up service which provides immediate home-based rehabilitation, equipment and case-management.

On average two thirds of Pathfinder patients have remained at home rather than being brought to the emergency department.

The service has been working as a collaborative service between NAS and Beaumont Hospital Occupational Therapy and Physiotherapy Departments for more than two years.

NAS Director Robert Morton said the expansion of the NAS Pathfinder Model is part of a plan to offer different groups of patients an alternative pathway other than presenting to a busy emergency department.

“Pathfinder is improving outcomes for older people by minimising unnecessary emergency department attendances and offering safe alternative care pathways for older people in their own homes rather than in hospital,” Mr Morton explained.

Pathfinder received initial funding from the Sláintecare Integration Fund to test the model in 2020 and has been operational since May 2020. The three new Pathfinder teams have been funded by the HSE. 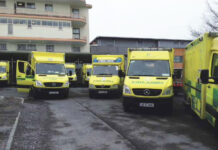