Home Rugby Ireland Nash steps up another notch with Ireland

ALTHOUGH criticised in some quarters, the recent Emerging Ireland Tour has proved a worthwhile exercise for Munster’s Calvin Nash, who is now part of the senior set-up for the upcoming Bank of Ireland Nations Series fixtures against South Africa, Fiji, and Australia.

The Young Munster clubman started in a couple of last month’s matches in South Africa, scoring in the opener against Griquas.

Speaking about his first selection by coach Andy Farrell to the Ireland senior squad, Nash said: “I was shocked, to be honest. Just delighted”.

“I told my girlfriend straight away and she was actually crying. I was telling her to relax. But it was great. My family are very proud of me, so I’m delighted.”

“This year the lads have been out and, with Emerging Ireland as well, I’ve had a lot of games. Beside the two pre-season games, I have three or four games already, which is really good.

“I feel like I’ve been able to have a flow to my game and stay in it that way.

“I did have a good bit of self-belief that I did have the potential to get to Ireland. I just wondered when it would be or would I get the opportunity to represent Ireland or even get up to camp.

“With Emerging Ireland happening just a few weeks ago my main thought was to just get into main camp and try to make that a routine and then get the first cap. It came quicker than I thought it would, but I am delighted.”

“I was obviously really nervous coming up to the Emerging Ireland squad because I had never really been involved from U-20s on.

“Getting to learn the calls, how the lads are playing, it made coming in here a lot easier and I felt happy with how I went.” 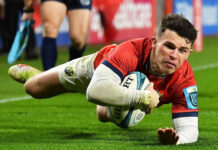 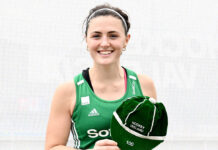