A LIMERICK historian, writer, and member of the LGBTQIA+ community has welcomed plans to disregard historic convictions of men who were prosecuted for being gay.

It comes as Justice Minister Helen McEntee launches a public consultation to inform the development of a scheme to disregard historic convictions related to consensual sexual activity between men.

Author, Limerick Post contributor and award winning historian in residence at Ormston House, Sharon Slater, described the move as a “wonderful sign of progression, solidarity, and respect to have these historic criminal charges of consensual homosexual relationships overturned”.

But the scheme only refers to male activity and she told the Limerick Post why.

“The criminalisation of sodomy came into law initially with the Buggery Act 1533, during the time of Henry VIII. The law referred both men and women,” the Limerick historian explained.

“This one sentence, known as the Labouchere Amendment, was widely interpreted as any male homosexual behaviour short of actual sodomy – which remained a separate crime.

“There is a story that when this addition was brought before Queen Victoria, it included the criminalising of lesbians, but she did not believe that women could carry out such acts, and so had that section of the law struck out.

“Although this is an interesting myth, it is just that – a myth.

“Women, until relatively recently, were considered property and as such did not have autonomy over their own lives. They were the property of their fathers and then their husbands.

“It is important to remember that marital rape only became a crime under section 5 of the Criminal Law (Rape) (Amendment) Act in 1990.

“So many lesbians did not have the ability to explore their sexuality and, if they did, their relations had the options of having them placed in a Magdalene asylum or insane asylum.

“This does not mean that lesbians were completely invisible in Irish society. Those who were independently wealthy had a freedom not enjoyed by their counterparts.

“Lesbian couples were very much part of the Easter 1916 movement and the War of Independence. They were hidden in plain sight, with their relationships publicised through code words such as “she lives with her dear friend”.”

Ms Slater added that it is “a positive move in Ireland to recognise the negative impact these Draconian laws had on men in our society”.

“We have been moving forward as a country, in both small and large steps, with the decriminalisation of homosexuality in 1993 and the introduction of Marriage Equality in 2015.

“These steps forward do not negate the pain of those who lived through a period where their very existence was a crime.

“This move to disregard historic convictions will hopefully bring some solace to these men, their families, and friends.”

Affected persons and representative organisations are being asked by Minister McEntee to provide their personal lived experiences and input on a number of key issues. Their responses will inform the final recommendations of a Working Group. 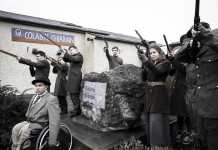 Croom will get its own Easter Rising