THE Cross Border Orchestra of Ireland (CBOI) kicks off a sell-out concert series this weekend starting in Limerick and moving to Dublin, Waterford and Belfast before flying to New York for a concert in Carnegie Hall on St Patrick’s Day.

The concert series celebrates their work and achievements in promoting peace, unity and tolerance on the island of Ireland since their foundation in 1995. Significantly, the concerts will also mark the 25th anniversary of the Good Friday Agreement.

The CBOI is now composed of over 130 exceptionally talented young musicians from all over Ireland including four from Limerick who travel to Dundalk for weekly rehearsals. A further 200 children and teenagers receive free music tuition through the CBOI’s music education programmes.

The group is best known in Ireland for their nationwide Peace Proms programme which is a free resource and choral education initiative for primary schools.

The concert series in Ireland and the US showcases some of the country’s most talented young musicians and performers including the the Nolan School of Irish dance from Limerick.

The Limerick concerts got under way in the UL Sports Arena this afternoon with another concert  at 8pm and further performances tomorrow (Sunday) at 1pm; Saturday, January 28 at 2pm and 8pm, concluding on Sunday, January 29 at 1pm and 7pm. 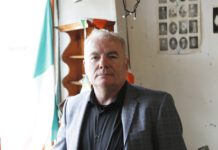