SINN Féin local election candidate Séighin Ó Ceallaigh has condemned Limerick City of Culture for ignoring the Irish language and failing to have any mention of ‘Seachtain na Gaeilge’ in its calendar of events.

‘Seachtain na Gaeilge’, is a two-week celebration that takes place every year between March 1 and 17 to promote the Irish language. Irish speaker Séighin pointed out that our language is a huge part of our culture and is flabbergasted that nothing was done to promote it as part of City of Culture. The City East candidate, who is involved in UL’s Irish Language Society believes our “culture is being ignored”.

“They are promoting Fuerza Bruta as a major part of the City of Culture calendar, but all they are doing is bringing in an international show, to make it seem they are doing something, where as the truth is they are not.

“People say the Irish language is a dead language, but this ignorance of the City of Culture is killing our language,” said 21-year-old Séighin.

“Fuerza Bruta  began in the middle of ‘Seachtain na Gaeilge’, and it seems the City of Culture are happy to put on some unknown international show to make a quick pound, rather than actually promote Irish culture.

“From the beginning the City of Culture has been a cause of controversy however it has huge potential to promote tourism in Limerick. But our culture has seemed to be the last item on the agenda,” he claimed.

There was no comment from Limerick National City of Culture at the time of going to press. 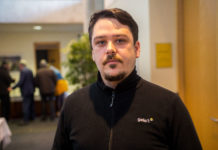