Ireland Women’s Coach Tom Tierney has announced his first RBS 6 Nations team for the 2015 Championship opener against Italy in Florence on Friday night.

There are six uncapped players named in the match day squad – Leinster’s Hannah Tyrrell will make her duet on the wing while Sarah Mimnagh, Fiona O’Brien, Katie Norris, Katie Fitzhenry and Sene Naoupu have been named on the bench.

Up front, Gillian Bourke is named at hooker and will be joined by Ruth O’Reilly and Ailis Egan in the front row. A familiar look second row sees Marie Louise Reilly and Sophie Spence take position. Paula Fitzpatrick, Claire Molloy and Heather O’Brien complete the pack.

Larissa Muldoon is named at scrum half and will be partnered at 10 by Nora Stapleton. Jackie Sheils and Jenny Murphy make up the centre partnership, with Alison Miller joining Tyrrell on the wing. The side will be captained by full back Niamh Briggs.

Ireland Coach, Tom Tierney said “There is a natural changeover with the number of players retiring after last season, but there is a core group of senior players that are very experienced and talented. We also have a number of younger players who are very talented and have a lot of promise so it’s a good mix”

“It’s going to be a very tough game over in Italy, we are under no illusions, but we are going over there very confident that we will be competitive”

This game will be streamed live on www.Federugby.it and www.youtube.com/fedrugby 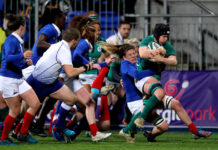 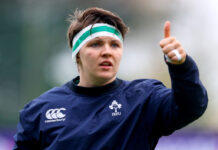