THE cost of adding calorie counts to menus will have devastating effects on restaurants, food outlets and businesses according to an industry representative group has claimed after Government approved proposals this week.

The Restaurant Association of Ireland (RAI) says that adding calories on menus will cost each restaurant in the region of €5000 to implement.

The Cabinet has approved proposals requiring food outlets to post the information at the point where the food is ordered, whether at tables or counters. Drafting legislation is expected to start immediately and should be ready for enactment by next year.

Chief Executive of the RAI, Adrian Cummins commented on the pending legislation.

‘The introduction of calorie information on menus will have devastating effects on the restaurant industry, costing €5,000 on businesses and will have a knock on effect in other sectors.”

The aim of this Bill is to encourage people to choose healthier options and to tackle the growing problem of obesity in Ireland.

But the RAI chief is urging Government “to reconsider this Bill in the interest of the restaurant industry and tourism”.

Mr Cummins reiterated that the Nanny State proposals are an unnecessary burden on the restaurant owners, as the measures would be virtually impossible to monitor.

“How does the government propose that this will be monitored? Will inspectors be paid to eat out in all of Ireland’s 22,000 food outlets and check if each menu has calorie counts on them? Any chef will tell you that menus in restaurants vary from day-to-day and therefore calorie counting would be highly inaccurate anyway.”

The proposed laws will require all menus, including boards, leaflets, digital menus or other forms, to display the amount of calories alongside the price in the same font size and colour. The RAI represents the interests of its members and lobbies on various issues at governments

The RAI say that calorie counts on menus have already been introduced in the United States, with disastrous results.

Five out of six customers paid no attention to the information, according to a study by New York University.

However groups in support of the move say that the labelling should go further with experts suggesting that the nutritional breakdown, including fats, sugars and salt, should take precedence over calories. 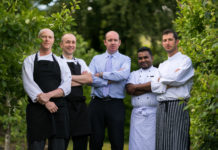 The Mustard Seed in Ballingarry

Fears grow 9 per cent VAT will be scrapped

RAI seeks out Limerick’s best eateries ahead of Irish #FoodOscars