HEALTH and safety concerns have been aired by residents of a Limerick housing estate who have to contend with dust clouds and the noise pollution from construction work on the Northern Distributor Road.

Eleven homes in Shannonvale off the Old Cratloe Road are directly facing the construction works of the Coonagh to Knocklisheen section of the controversial Northern Distributor Road and residents are concerned about their children’s safety.

Site security has also been identified as a serious issue and residents told The Limerick Post that the noise caused by the constant flow of trucks and machinery is beyond frustrating.

They also fear that air quality is affected by the excessive dust raised from site vehicles.

Una Hall, whose home faces the construction works, said that they want the site closed for the summer and are dissatisfied with the lack of action from Limerick City and County Council.

“I would like the Council’s chief executive Conn Murray to come out here and see what we have to put up with. We just want the children to be able to go outside during their time off school and not be worried about their health and safety,” she explained.

Ms Hall said that they had asked local authority officials to close the site but this was refused in an email sent to the residents.

The Limerick mother, who queued overnight to buy her home in 2005, said that lorries rumble in from 7am and remain in a constant stream until after 5pm.

“It’s unbearable at times and the constant in and out of the trucks with the beeping and the rumbling is just unbearable.

“Although the security gates on the Old Cratloe Road prevent access to the site from the roadway,”all the kids go over the railings at the side of the estate and go down and play. They are running up and down the mud hills on the site and my fear is that it’s all loose dirt and someone will fall or get seriously hurt or trapped.”

Ms Hall said that the Distributor Road will be less than 70ft from the estate railing in Shannonvale and almost 2.5m higher than the estate driveways.

“We are going to be looking at road level from our windows and there is going to some flow of traffic on it. This has, and will, affect our quality of life and we have been left in the dark about it.

“Nobody said that it was going to be this big of a project and so close to us. They are looking at putting up a sound barrier wall at the roadside and won’t be nice to look at.

“We queued to get these houses back in 2005 and 2006 and it was on the basis that we had this green view to look out on and have quality of life with privacy.

“While they said there was a proposal for a road, it was never outlined as a dual carriageway with cycle lanes and paths.”

Of even greater concern for the residents is the dust pollution originating from the site.

“Some of the children have been affected by breathing issues and infections.  We are not sure if it is all connected but there was no evidence of this prior to construction beginning.

“The use of a water bowser to dampen down dust is not simply not sufficient.

“Officials have said that the site will close in six to eight weeks and then the roadworks will have to settle for nine months, but can they not close it early and let us get on with the summer. This goes way beyond an inconvenience,” Ms Hall declared.

Limerick Fianna Fail TD Willie O’Dea told the Limerick Post that he has engaged with City Hall to have the site secured as soon as possible and the residents’ concerns addressed in a proper manner.

A council spokesperson said that “An Bord Pleanála granted permission for the Coonagh Knockalisheen distributor road in 2011 and this included the installation of a noise barrier for 180 metres from the Old Cratloe Road towards the hammerhead at 43, Shannonvale.

“The Council has agreed to re-examine the projected noise levels associated with traffic volumes and to extend the noise barrier where warranted. They have also confirmed that they have addressed all site security concerns,” the spokesperson concluded. 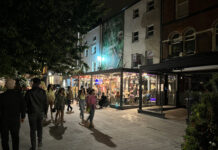