Home Lifestyle Arts Being Sweet About Me

FANCY playing all dozen characters in a live show? A dark comedy set in an addiction centre? Not for the faint hearted and neither is subject matter core to the sugary sounding ‘Sweet About Me’.

Jacinta Sheerin is the writer as well as sole actor. ‘Sweet About Me’ content is informed by her  experience first hand with an eating disorder – and the intense loneliness that went with its concealment and corrosive effect.

Dramatherapist Sheerin is an award winning playwright and producer, known for her successful works ‘I’m not ADHD I’m Bold’ and ‘Waiting for IKEA’.

Arts Page interviewed her in October last when touring on stage for Eoin Colfer’s bitter sweet ‘Holy Show’. And well pleased she was to be acting only, and not theatre making from scratch.

‘Sweet About Me’ is absolutely her own creation though. What was in her mind when she devised this comedic piece of truth-telling?

“I suppose I had in mind my own eating disorder – I am in recovery nine years now. When I had a good run of recovery behind me, I thought I’d love to make a show for young people about addiction and especially about binge eating.

“I felt there was such isolation, on my own with it and such shame.”

This Dub speaks with poignancy of life as it had been, overeating insatiably and bingeing according to what day in the week it was. Moving on from the disorder’s grip, she moved her family life to Ennistymon with her husband, all the better to raise their children. She tours around the Mid-West professionally.

“I wanted to write this piece ‘Sweet About Me’ to bring light to the subject.” Crediting director Veronica Coburn and producer Áine Rynne, the resulting theatre piece has gone to schools and theatres and merited strong testimonials.

Jacinta Sheerin underlines the comedy and tensions, “set in an addiction centre so it’s like people with all these addictions such as heroin and cocaine and so on, and the spectacle to match. Naturally there are dramas between the characters, someone with an eating disorder and someone with heroin addiction, and the therapists.”

She clarifies what a dramatherapist is as opposed to a drama facilitator: you go into the making of work with the intention of therapy with the session.

Her central character is 18 year-old Bernie Fagan who has a raggy enough relationship with her Ma. Thus the reach-out to our schoolgoing population who are inevitably meeting challenges such as drink seshes, body image, drugs and so on, their own or within family or with their peers.

“We do a question and answer at the end of the production. I open the floor, ask a few questions and get a really interactive session going. As a dramatherapist I am trained to hold the space and hold the silences, let them have the time to think their thoughts.” Contact producer Áine Rynne on email [email protected] and 087-1809 629. 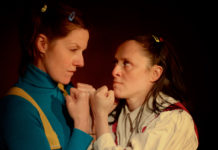 An unHoly Mary from Ennistymon 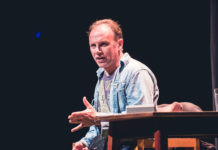 The last hours of My Real Life

Behind the scenes and dreams of Angela’s Ashes The Musical

Operatic chords for Joyce’s The Dead