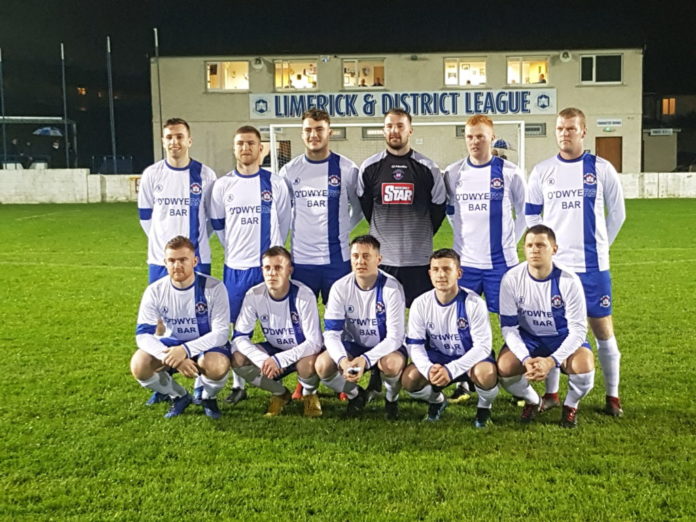 Just metres away, the Limerick District League Youth side were dominating their clash with Kerry before the game was abandoned due to safety concerns. However, it was a very different story for the junior representatives.

Limerick District were announced as one of the early favourites for the competition and entered their opening game against Clare at Jackman Park in buoyant mood. Speaking to members of the squad before a ball was kicked, many felt it was the strongest squad they had been involved in on paper, and considering some of the seasoned campaigners which had spoken in glowing terms about their future team-mates, belief was high that Limerick could successfully defend the title won by Janesboro last season.

The Clare game did nothing to deter such confidence and belief. Despite struggling until the hour mark, John Grehan’s side took control and goals from Connor Ellis and Clyde O’Connell led them to a 2-1 opening night victory.

Five days later, the squad travelled to Clounreask for a local derby against the Limerick Desmond League, a side who had returned to the competition after a prolonged absence the previous week when drawing with Kerry. Even from the warm-up, it was clear to see how determined the home side were as they were given little chance outside of their own dressing room.

In the first 20 minutes, Limerick District League were blown away by their opponents intensity and found themselves 2-0 behind and with a mountain to climb. Rathkeale duo Gary Enright and Pa Ahern were particularly impressive for Jimmy Neenan’s side as the District League looked shell shocked.

Although the home side possessed some very intelligent players, it was an inexcusable start from the visiting side whose lack of fight early on could only be attributed to complacency.

Another big factor was the surprising omission of both Connor Ellis and Clyde O’Connell from the starting 11 for the trip. Although Limerick District League assistant manager Leon Casey-Ryan stated that some players had picked up knocks the previous week including Ellis, the former Cork striker did not show any ill-effects when he was introduced early on for the injured Kieran Hanlon.

Hanlon is a player who is yet to come to life at junior level following his return from Limerick FC. Joining Ballynanty, the physical striker struggled in two big games for the northsiders against both Pike and Fairview and considering the lack of football Hanlon has played for Donal Magee’s men due to the restriction on re-graded players lining out in the starting 11 in the league and local cups, it is surprising that the front man started all three games for John Grehan’s men.

That being said, that decision alone was not the main reason for Limerick’s poor ending to the campaign. At the other end, the team conceded 8 goals in two games and when you look at the experience and quality that the side possessed in defensive positions, it was a very disappointing return.

For last Sunday’s encounter, Grehan was unable to select Ellis, Daly and the vastly experienced Pat Mullins for various reasons. Missing three players of that quality for such a big game was far from ideal. Also, the fact that Jason Hughes, Ross Mann and Steven Bradley were unavailable for selection, didn’t aid the management team.

Mann in particular, is enjoying his best run of form at junior level so far and with his lightning pace, has proven a handful for any defence in the country. Bradley has proven time and time again that he is a player for the big occasion and could have been crucial in the middle of the park.

However, we could speak about the what-if’s in terms of squad selection all day and it wouldn’t change the outcome. The bottom line is that the squads selected were very strong on paper but did not gel on the pitch, despite showing great character to bring the score back to 3-3 before a late concession.

Last season, Janesboro represented the league with aplomb and ended a 23 year wait for victory in the Oscar Traynor Trophy. It raises the question; is it more beneficial to enter your league champions every season as they are so familiar with their teammates strengths and weaknesses and train together every week?

As Grehan clearly stated at the beginning of the campaign, the players would not be training together as it would be counter-productive due to their club commitments. It is very difficult to gel as a team when you do not play together regularly. Although, they District League players are in opposition at club level every week, it is different at inter-county level.

Although the Janesboro model was successful last year, a club team entering the competition for the league does take away the opportunity for many very capable players to represent their respective league.

Also, the interest from the general public may not be as high as club rivalries rise to the surface. Many people were in agreement that the return to a representative outfit filled with players from various clubs was the correct decision, and I still believe this is the case.

However, in order for this to continue, a manager must be selected early and every player readily available must strive to play for the league if selected, which hasn’t always been the case in years gone by. Unfortunately, 2019/2020 will go down as a disappointing one on the field, but the return to the old format is still a welcome one.