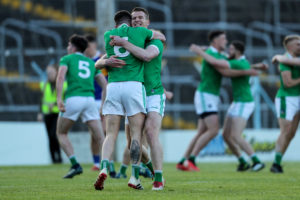 Limerick’s senior footballers got off to a winning start in Allianz League Division 4 by beating Waterford on a 1-10 to 0-10 scoreline in Fraher Field, Dungarven.

The sides were level at the break, but Limerick improved drastically in the second half with Danny Neville shooting 0-3 on their way to victory.

Billy Lee’s men finished the game with 13 players after Paul Maher and Bob Childs both picked up two yellow cards each.

Seamus O’Carroll got Limerick on the board inside the first minute with an excellent score, but Waterford hit back with four on the bounce to lead by three after 11 minutes.

Limerick keeper Donal O’Sullivan also slotted two first half frees, but replies from Conor Murray and Jason Curry saw the sides level at 0-6 to 1-3 at the break.

Midfielders Tommy Griffin and Enright got Limerick on the board early in the second half with excellent points and Neville’s three efforts at vital times saw Lee’s charges come away with a hard earned victory.