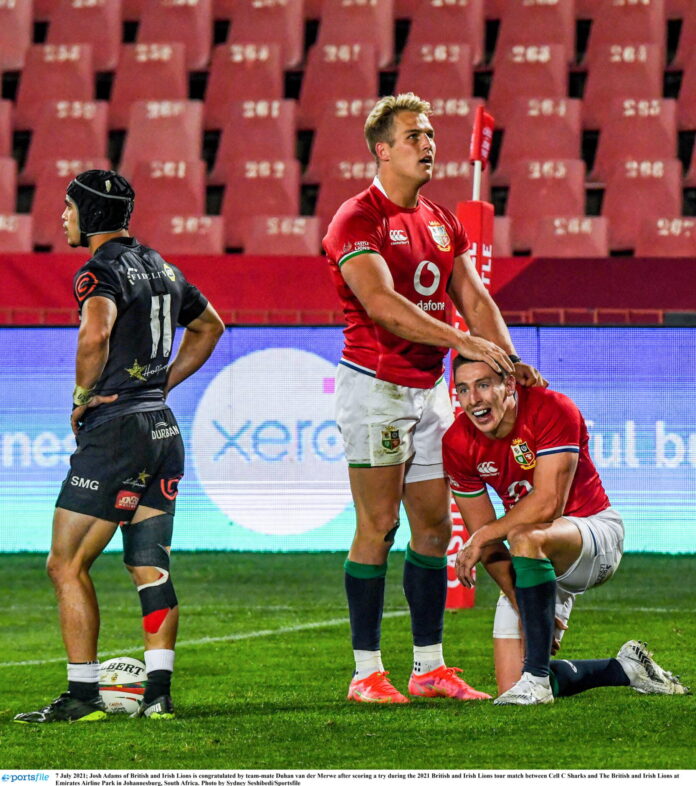 THE British and Irish Lions won their second official game of the tour by a margin of 47 points against the C Cell Sharks.

The fixture itself was surrounded by uncertainty as members of the Lions camp tested positive for Covid-19, resulting in the match-day squad enduring some drastic last minute changes.

Gareth Davies, Dan Biggar, Anthony Watson and Liam Williams were all withdrawn from the starting 15, along with Munster’s Conor Murray and Tadhg Beirne and Scotland’s Stuart Hogg and Chris Harris who were pulled from the bench.

Irregardless of the uncertainty surrounding the squad, their performance was unaffected. Both wingers, Duhan Van Der Merwe and Josh Adams, crossed the Sharks try line within the opening 10 minutes, setting a precedent for the free-flowing style of rugby that was to follow.

The Lions would capitalise on the sin binning of Sharks winger Werner Kok as Van Der Merwe chased down a deep grubber kick from Farrell, which he would regather for his second try. The seldom occurrence of a missed conversion from Owen Farrell would go practically unnoticed due to the dominance of the tourists.

Connacht’s Bundee Aki bagged his first try in red towards the end of the first half, the centre managed to bully his way over the line in the form of a pick and go from just inside the Sharks 5-meter. Owen Farrell slotted the conversion to end the half and the Lions went to the sheds looking unfazed by the past 40 minutes.

With a comfortable lead of 26-0 the Lions were caught snoozing, as the Sharks ran in the first try of the second half. The Sharks exploited space down the Lions wing with some remarkable offloading, allowing back-row James Venter to gallop over the try line.

The Lions brought in some fresh legs in the form of Finn Russell, Tadhg Furlong and Rory Sutherland. Their impact was visible almost immediately as a creative chip kick from Russell would open up the Sharks defence, resulting in Josh Adams’ second try.

The Sharks defence grew increasingly disorganised, as Welsh speedster Louis Rees-Zammit exploited a gap down the Sharks touch-line to score his only try of the game. The Lions continued to torment the Sharks defence as Duhan Van Der Merwe scored an identical try to Rees-Zammit’s, on the opposite wing.

Joining Van Der Merwe in his hat-trick of tries was Josh Adams, who in one of the games final plays crashed over the line after an exceptional series of offloads by the Lions. Scoring his 8th try in just 3 games, Adams is without a doubt one to watch for the remainder of the tournament.

With a final score of 54 – 7, The Lions made the most of what was a sub-par opponent. However, regardless of the ease of which they won the game there was strong positives to be taken from the Lions performance.

Finn Russell squashed any concerns regarding his consistency off the tee, maintaining a 100% kick success rate from four attempts. On paper the game was relatively close, with the minority of possession, territory, meters carried and defenders beaten, the Lions were remarkably efficient with the ball.

With a whopping 8 tries (7 converted), the Lions next fixture agains the Vodacom Bulls is not to be missed. Sadly, due to the uncertainty within both camps due to Covid-19 the game has been postponed. However some optimism remains around the fixture and the tour itself, so we surely won’t have to wait long to see the Lions run out again.