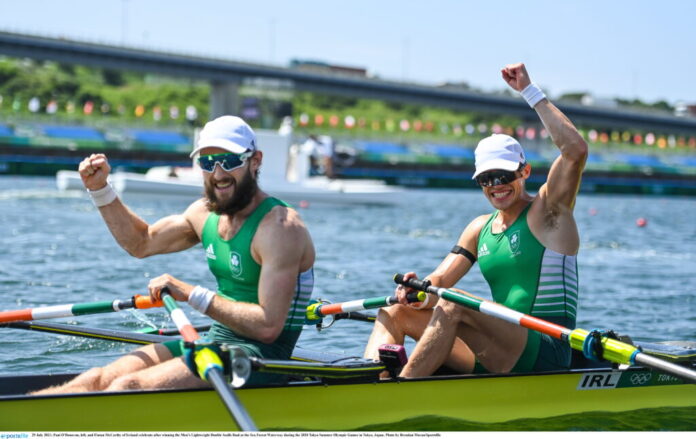 HISTORY was made for Ireland at the Olympics in the early hours of the morning.

They fended off the Germans to win Ireland’s first gold since London 2012 when Katie Taylor did the honours in the boxing.

The Cork pair went into the race as favourites and managed to conjure up a time of 06:06:43, beating the Germany boat to the line by 46 seconds.

Both McCarthy and O’Donovan have brothers who they have rowed with previously but they were paired together for the greater good and it has come to fruition.

Speaking after the race, the Cork pair were both cool, calm, collected and delighted after reaching the pinnacle of the sport.

It is Paul O’Donovan’s second Olympic medal after he won silver in the double sculls with brother Gary in Rio five years ago.

He becomes the first Irish athlete to win Olympic gold and silver medals.

The Cork pair were as charismatic as the last Olymo

“I didn’t think about too much how I felt at the time, so it’s difficult to compare it from five years after,” he said.

“Winning today and silver medal last time, I’ll be a bit happier about that. The silver medal is nice but Fintan did the right job and we went straight to the top at his first Games.

“The two boys (Germany) have been looking strong all week and made us really work hard. Italy were quick off the start and didn’t let us have it easy.”

Their victory came in the aftermath of Ireland winning their first medal of the Tokyo Olympics when Aifric Keogh, Eimear Lambe, Fiona Murtagh and Emily Hegarty pipped Great Britain and took home bronze in the final of women’s rowing fours.

A great achievement for a group who only confirmed their slot in the boat national trials in March, before claiming a silver at the Europeans weeks later, and then booking their places here in Japan with a superb effort at the regatta in Lucerne.

“We knew we could win a medal, it was just about whether we could pull it off,” Keogh told RTÉ.

“We knew every crew in the boat was also capable of winning a medal and it was just about who got down the course as well as they could in position. It was a bit touch and go.”

“Throughout the race, I was like, ‘we could be fourth, fifth.’ Eimear makes the strategy calls and I tell us where we are in the field. I was looking out and I was like, Oh God.”

“In my head, we were slipping back but we said to ourselves if that happens we go early and the last 1k we backed ourselves. Everyone else knows out here that in the last K we just start to go and you could kind of hear it, left and right they were like, ‘don’t let them, don’t let them’.”

The 51-year-old Longford shooter finished 26th in the men’s trap qualification today with a score of 118.

Race walker Rob Heffernan and sailor David Wilkins are the only other two to rack up five Olympic appearances.

Only the top six progress to the final, so his score meant he missed out, with three missed targets in the first round yesterday proving costly.

Rory McIlroy & Shane Lowry have started brightly in the golf, shooting -2 and -1 respectively in their opening rounds in the golf.

Rower Sanita Puspure was unlucky not to qualify for the final, clocking up a fifth-placed finish in her semi-final.

In the judo, Ben Fletcher lost a tight judo contest 1-0 to Mukhammadkarim Khurramovto in the men’s 100kg.

Sailor Annalise Murphy produced an impeccable performance to leave her in the hunt for a medal.