PATRICKSWELL Community Council has been accused of failing to involve the local community in plans for a new €1.5 million community resource centre in the village.

The accusation was made by Independent councillor Fergus Kilcoyne who claimed that the Community Council failed to publish the drawings for the proposed centre until after they were lodged.

He also said that planning permission was obtained solely by the council’s executive committee without consulting with the full committee.

“Those members requested that a public meeting be held but this was refused. I also believe the community of Patrickswell should have their say in what is being built in their name and for their use by their families,” Cllr Kilcoyne told the Limerick Post.

He hit out that the proposed €1.5 million multipurpose hall of 1,350 square feet will not have changing rooms or shower facilities.

He said that many local people were shocked that the plans were not put on public display until after they were lodged.

“The community wants a multipurpose hall for different sports and activities like fashion shows and plays. This was seen as a priority and current plans do not meet these requirements.

“The hall now excludes shower/changing rooms which were in the original plans and therefore no sporting activities can be held there.”

“Reducing the hall to one sixth of its original size is a waste of  €1.5 million. The plan should contain a hall of at least 4,000 square feet with divides for meetings, showers, changing areas and furniture storage.”

The City West representative, who collected 462 signatures in a petition, feels it is not an unreasonable request for a public meeting to be called.

Meanwhile, government funding of €500,000 towards a business hub in the proposed multipurpose community centre for Patrickswell was announced last week.

Cllr Kilcoyne maintains that this strengthens his request for revised plans to be urgently submitted for a larger hall.

“I am disappointed that attempts are being made to divide the community. The people of Patrickswell have waited too long for a community centre and any proposals that will require planning permission will certainly significantly delay or even stop the project going ahead,” he explained.

“By working together we can achieve so much and this is something we have the power to do and deliver much-needed community facilities that our community have waited decades for.”

A spokesperson for Limerick City and County Council told the Limerick Post that responsibility for the project lies with the Patrickswell Community Council.

“While Limerick City and County Council is supportive of plans for a centre in the village, it is not responsible for the delivery of the project nor for it going through the required planning process. The planning process allows for plans to be submitted, a period for public submissions to be made and then adjudication. Any issues are a matter for the Community Council.”

In a statement issued to the Limerick Post, Patrickswell Community Council said that in January 2021, the full committee gave permission to the executive committee to establish a development group with the sole purpose to deliver a much-needed community resource centre.

Having reviewed a number of community centres in the surrounding areas and seeing the success of Ballybrown Community Centre, they agreed that this should form the basis for their proposal.

“The proposed Community Resource Centre has gone through the full planning process and has received full planning permission from Limerick City and County Council. To date we have received in excess of €1 million in funding to deliver the project.

“The layout of our proposed centre is in the region of 20 per cent larger than Ballybrown Community Centre, which we believe has the ability to cater for the needs of our community. It is important to take into consideration that, as our community grows and as funding becomes available, we will have the ability to extend our community centre.”

The statement  went on to point out that the community council has a strong record of interaction with the community, but during the design and planning stage, due to ongoing public health restrictions, it was not safe or permitted to hold public meetings. 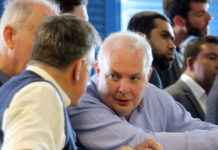