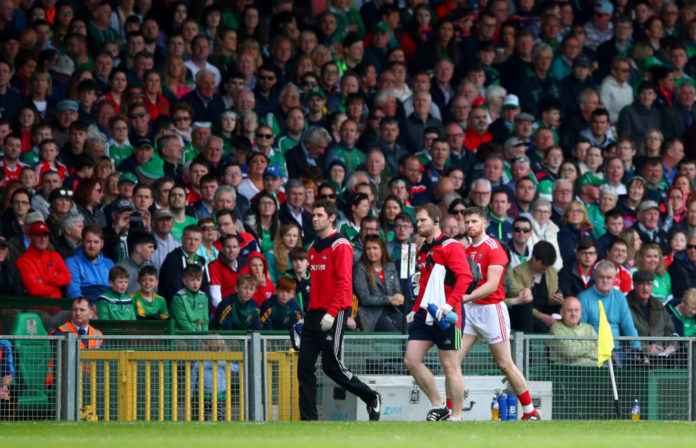 Cork bounced back from last week’s disappointing loss to Tipperary with a fully deserved 1-26 to 1-19 win over Limerick at the Gaelic Grounds this afternoon.

The win puts the Leesiders right back in Munster contention and adds further pressure to Limerick’s trip down to Waterford in two weeks time.

Diarmaid Byrnes opened the scoring with a midfield free after Cian Lynch’s hurley was dragged back. The lead lasted less than 60 seconds as Pat Horgan levelled from placed ball.

Conor Lehane and Aaron Gillane then swapped scores but more significantly, Lehane suffered an knee injury in the process of scoring. The Cork marksman went off to be replaced by Alan Cadogan.

Graeme Mulcahy edged Limerick in front but Harnedy and Cadogan pushed Cork into 0-04 to 0-03 lead.

Limerick started to develop a bit of a rhythm in the following five minutes reeling off three in a row courtesy of two Gillane frees and a Graeme Mulcahy point from play.

Horgan landed a Cork free but Kyle Hayes then landed his first of the afternoon to make it Limerick 0-7 Cork 0-5 after 15 breathtaking minutes.

Cork’s full forward line were asking questions of Limerick’s full back line and when Richie English fouled Alan Cadogan, Horgan converted. Daniel Kearney then stepped up to level proceedings with a fine score from play.

A long range effort from Diarmaid Byrnes saw Limerick in the ascendancy once more 0-8 to 0-7.

Limerick had a chance to make it a two point lead but Gearoid Hegarty’s effort dropped short, Nash cleared long to Cadogan who broke the ball to Pat Horgan who made no mistake to level the scores at 0-8 apiece.

The spark came on the 27th minute when Limerick worked a short free well to Declan Hannon. The Adare man’s shot dropped short into the hand of Graeme Mulcahy. Mulcahy fired a rocket from the closest of angles past Anthony Nash to raise a green flag.

Pat Horgan hit a huge long range effort before the in form Mulcahy added another score to make it Limerick 1-10 Cork 0-9. Cork didn’t panic and landed the next three points in a row via two Horgan frees and an excellent Cadogan point.

Limerick seemed to move Gearoid Hegarty to the edge of the square for the last few minutes of the half and the St Patricks man should have had a goal when Cian Lynch found him with a long range pass only for his first touch to desert him.

He made up for it in the next attack when he drew a foul on the edge of the square only allowing Aaron Gillane to have the last say of the half with a routine free from the 21 yard line to make it Limerick 1-11 to Cork’s 0-12.

Limerick squandered two good scoring chances directly after the restart before Luke Meade reduced the arrears to just a point as he knocked over a fine point for Cork. Two minutes later and Alan Cadogan levelled for the Leesiders.

The visitors were were outscored by 6 points to 1 at the start of the second half and were second to the breaking ball. John Kiely knew his side were in a huge battle. Cian Lynch was pulled down on the 21 allowing Gillane to make it a 1-point deficit.

Limerick were struggling to find a rhythm but came close to a goal chance when Anthony Nash almost made a mess of a clearance. Cork cleared and went long. The ball broke for Pat Horgan who fired past Quaid to make it Cork 1-18 to Limerick’s 1-14.

Gillane stopped the rot but Cadogan, Horgan and Meade made it 1-21 to 1-15 to Cork. Dowling and Flanagan came on for Hegarty and Peter Casey respectively as Limerick looked to ignite their championship.

A Tom Morrissey point was quickly nullified by Darragh Fitzgibbon. Limerick were looking for a goal and a Cian Lynch run almost created it. In the next attack, Gillane was fouled on the edge of the square before dusting himself off to reduce the arrears to five.

Substitute Declan Dalton landed an inspirational point from the sideline in front of the Mackey stand to put Cork back in control. Dowling slotted a Limerick free but Horgan and Kearney made it a 7 point game.

Dowling tapped over another free before Limerick squandered a goal chance when David Dempsey failed to gather a Tom Morrissey pass. Declan Dalton landed the last score of the match with a long range points as Cork ran out fully deserving 1-26 to 1-19 winners.

Back to the drawing board for Limerick who face into a do or die battle with Waterford in Walsh Park in two weeks time in what could well amount to a knockout game.