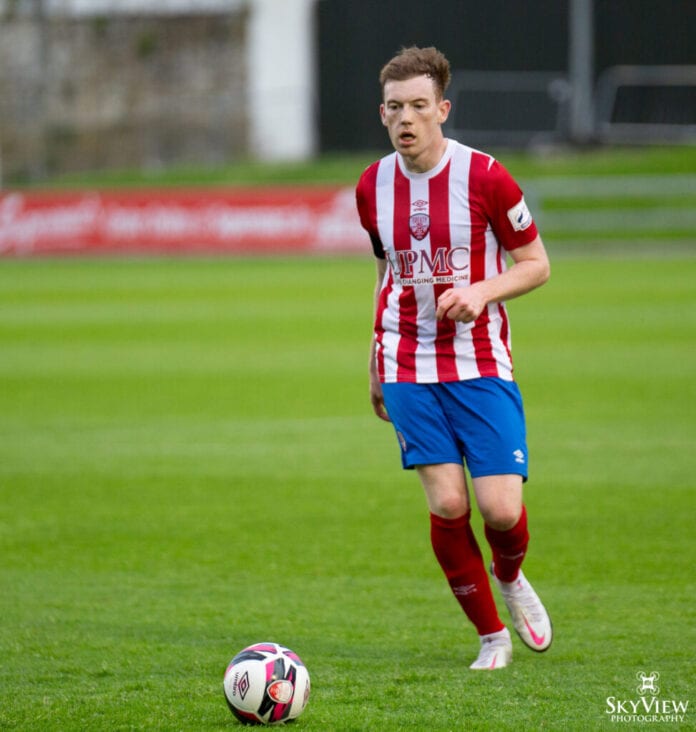 An own-goal from Darren Murphy and a first goal of the season from Matt McKevitt secured the win for the away side who move three points ahead of UCD.

It was a hectic start for Tommy Barrett ahead of the Munster derby clash as captain Jack Lynch pulled up in the warm-up and was replaced by Joe Collins in midfield. The Clare native was suffering from an injury picked up against Wexford FC last week and added to a fairly lengthy injury list at present.

Treaty began with a tight 4-3-3 formation again with Joe Collins supporting both Callum McNamara and Ed McCarthy who reverted to a deeper role as a number 6. Outside of that late change, Barrett selected an unchanged side from the win against Wexford.

The home side made the better start to the game and following patient build up play involving three players, Ian Turner’s shot from the edge of the area was well gathered by Tadgh Ryan.

In the opening exchanges, Treaty’s midfield trio were struggling to put significant pressure on the Ramblers midfield but Cobh’s lack of cutting edge ensured that chances were few and far between.

Former Limerick FC man Lee Devitt’s speculative shot from all of 25 yards was easily saved by Ryan as Cobh struggled to break down a resolute defensive unit.

Treaty had shown little to no ambition in the attacking third in the opening period but were handed the opportunity to grab an unlikely lead when referee Oliver Moran awarded a penalty as James McCarthy fouled Joel Coustrain in the penalty area.

Usual penalty taker Sean McSweeney is still sidelined through injury so striker Kieran Hanlon stepped up but was denied by Sean Barron in the Cobh goal.

Just two minutes into the second half, Charlie Fleming whipped in a dangerous free-kick from 40 yards out and the ball appeared to sail directly into the net beyond the despairing glance of Barron.

Despite the former Cobh defender quickly claiming credit for the goal, it appeared to hit the head of Darren Murphy which deceived the goalkeeper to give Treaty the lead.

In an exceptionally scrappy and strange second half, neither side were able to create chances of note until Cobh manager Stuart Ashton introduced forward duo Killian Cooper and Ciaran Griffin. Two headers in quick succession from Charlie Lyons and Daryl Walsh travelled just over Ryan’s crossbar as the home side finally began to apply some pressure to a comfortable Treaty defence.

Striker Conor Drinan almost grabbed the equaliser they craved with a sweet snapshot from the edge of the area which flew narrowly wide. With time running out, Barrett introduced the usual combination of William Armshaw and Matt McKevitt along with both Edmond O’Dwyer and Alan Murphy.

Armshaw and McKevitt have made huge impacts in recent weeks and this week was no different as Armshaw jinked his way to the byline before squaring for McKevitt and the former Peake Villa man slotted into the net via the aid of a deflection to ensure the three points were heading home with the Limerick side.

The result puts Treaty into an incredibly healthy position ahead of next week’s crunch clash with Galway United at the Markets Field. The only concern for Barrett will be the addition of Jack Lynch to the treatment table and the news that Sean McSweeney will be out for at least another month. However, with the u-19’s becoming available to select in July and the transfer window opening, it could be an interesting period.