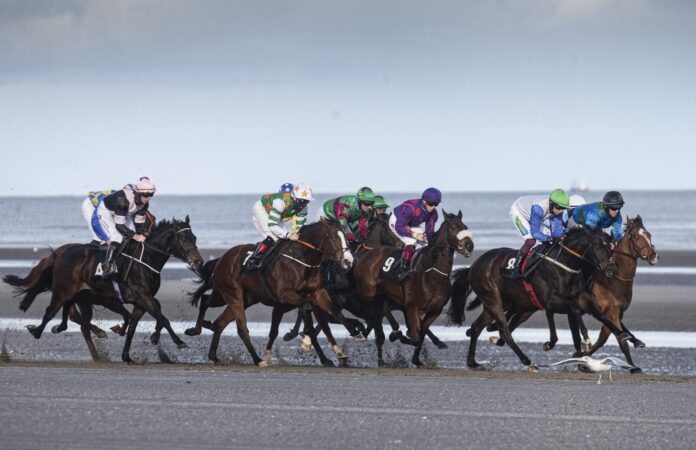 MARK Enright put himself in a very select grouping when winning the Melbourne 10 Sorry We Can’t Be There Handicap at Laytown on Monday with Hell Left Loose for trainer Denis Hogan.

Enright asked every question of his partner in the closing stages Enright to mow down Teddy Boy late on by a neck, and in the process, completed the full house of Irish racecourses, each of which he has ridden a winner at now.

Mark McDonagh earned plenty of praise from owner-trainer Willie Austin for a patient ride as the home-bred Crack On Corrie scored in the BarOneRacing Winter Festival Handicap Hurdle (Division 1) at Fairyhouse on Tuesday.

The homebred 11-year-old clearly retains all her enthusiasm for racing and running in the colours of the Cloughjordan trainer, benefited from McDonagh’s kid-glove treatment, taking it up two out while travelling powerfully and skipping clear to land the honours by two and a half lengths.

Richard O’Brien was rewarded for keeping three-year-old Eloso busy this term as the durable son of Kodi Bear got off the mark at the 15thattempt having made his debut at Dundalk in January, returning to the all-weather track to land the Story Of Dundalk Stadium Apprentice Maiden on Wednesday.

The trainer hailed the ride of Scott McCullagh, who took his time before delivering a searing run to take it up inside the final 100 yards to prevail by a neck. The Hayes brothers, trainer Paddy and jockey Chris combined to garner the concluding second division of the Irishinjuredjockeys.com Handicap by a half-length with Pro Bono at odds of 9/2.

The son of Lord Shanakil was produced with his challenge on the wide outside, swooping over the top of the leaders to prevail a little cosily at the death.

Newmarket-on Fergus permit holder Aengus King was delighted to see Gold Creek finally break her duck when galloping to a two-and-a-quarter-length victory in the Ballagh Mares’ Handicap Hurdle at Thurles on Thursday.

Gavin Brouder was happy to track the leaders early on in the two-and-a-half-mile contest before making steady progress three out and he was disputing the lead on the seven-year-old with Misty Millie, who came a cropper at the last under pressure.

Permit holder, Lenny Flynn recorded his first track success when All The Chimneys flashed home under Shane Fitzgerald to spring a 20/1 shock in a dramatic conclusion to the Littleton Handicap Chase at Thurles on Thursday. A bad mistake by the leading Defan ruined his chance and All The Chimneys just got his head in front of the ensuing battle with Shakeytry.