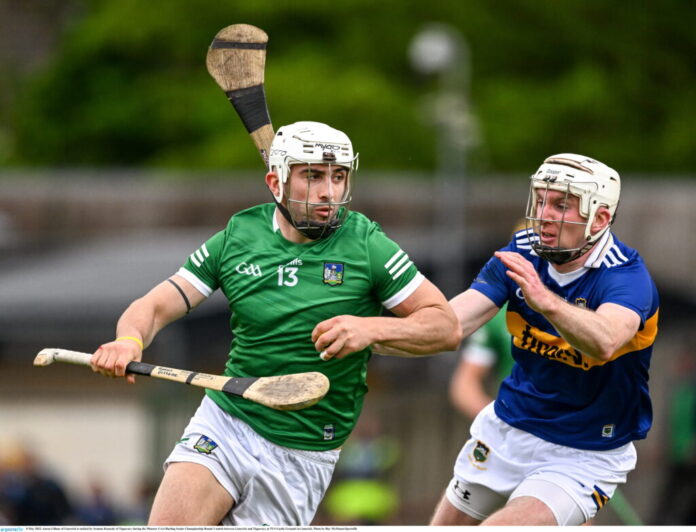 A sensational scoring spell in the final quarter saw Limerick earn a 3-21 to 0-23 win over Tipperary at the TUS Gaelic Grounds.

Limerick scored 1-5 without reply between the 61st and 67th minutes saw John Kiely’s men storm from behind to win by seven points. Conor Boylan and Aaron Gillane got the goals late on.

The victory is their third in a row in the Round Robin Munster Senior Hurling Championship but they are still not guaranteed a final place ahead of their final fixture against Clare in Ennis.

Ger Browne got the scoring underway for Tipperary in the second minute but Limerick immediately responded through Darragh O’Donovan.

Noel McGrath and Aaron Gillane then swapped points before a long range Diarmaid Byrnes free saw Limerick in front for the first time.

Tom Morrissey then put the Munster and All-Ireland champions two to the good with a trademark point from the left wing but Tipp brought it back to the minimum when Browne scored his second of the game.

Things got even better for Limerick after eight minutes when Gillane caught a Byrnes long delivery and fired past Barry Hogan from close to leave the score at 1-4 to 0-3.

Things slowed for Limerick after that as the Premier hit the next six scores to lead 0-11 to 1-6 after 29 minutes. McGrath popped over four of them and there was one each for Browne and Jake Morris.

Limerick stopped the rot with two fine scores from Cathal O’Neill but Barry Heffernan and another from McGrath kept Tipperary two to the good.

Graeme Mulcahy and McGrath then fired over a point apiece that left the score at 0-14 to 1-9 at half time.

McGrath and Gillane fired over frees on the resumption before Gearoid Hegarty brought Limerick to within a point.

Tipperary stretched into a three point lead with efforts from Jake Morris and Paul Flynn but Darragh O’Donovan and Morrissey made it a one point game again.

That lead was at two points heading into the final 10 minutes but it was here that Limerick brought things to a different level.

Two Diarmaid Byrnes points levelled the game before David Reidy put Limerick ahead for the first time since the 22nd minute.

An excellent Declan Hannon point from play and a Gillane free then saw Limerick into a 1-20 to 0-20 advantage.

Limerick then hit the killer blow when Seamus Flanagan found an unmarked Boylan on the 14 metre line.

The Na Piarsaigh man lost control of the ball but then dived to flick the ball past the onrushing Barry Hogan and into the back of the net.

Gillane then buried a third goal when he collected O’Donovan’s pin point delivery to put Limerick nine points to the good and seal the victory.